Subsite® Electronics Introduces Its Most Advanced HDD Guidance Display Ever 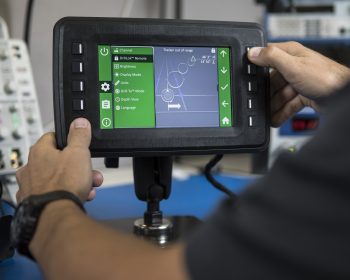 Perry, Okla., October 19, 2016 – Subsite®Electronics, a Charles Machine Works Company, has introduced its most advanced HDD guidance display ever: the Commander 7. The new display offers enhanced capabilities to the TK RECON™ Series HDD Guidance System and delivers all vital tracking data to both the tracker and drill operators. Commander 7 is compatible with both Apple® iOS and Android™ devices. It has an expanded communication range, faster data rate speeds and a large, high-resolution 7-inch screen with intuitive, user-friendly icons. Most notably, the Commander 7 offers users three ways to view their tracker data, including an all new Advanced Drill-To™ mode featuring PerspectiveView™—an intuitive leap forward in data presentation that the company claims is “truly out of the box.”

Perry, Okla., October 19, 2016 – Subsite® Electronics, a Charles Machine Works Company, has introduced the Commander 7 HDD Guidance Display. A direct result of customer input, the Commander 7 is the company’s most advanced display ever.

“Today, much of the industry wants all vital tracking data delivered to both the tracker operator and the drill operator,” said John Bieberdorf, product manager, HDD guidance systems, Subsite Electronics. “The Commander 7 does just that, putting everything in the hands of the two most skilled workers on the jobsite.”

Offering enhanced capabilities to the new TK RECON™ Series HDD Guidance System, the Commander 7 utilizes an upgradable technology base that allows the company to incorporate several advanced features now, and accept upgraded features in the future.

“This new technology approach will allow users to upgrade their displays in the future much like you would a smart phone,” Bieberdorf said. “You’ll be able to update software and add features, letting you keep your hardware longer.”

The new upgradable technology base also allows the company to debut the Commander 7 with a number of impressive features. For example, Commander 7 is compatible with both Apple® iOS and Android™ devices, making the display available to whole new user base that isn’t currently being serviced by competitive offerings.

The Commander 7 also features an expanded communication range, faster data rate speeds and a large, high-resolution 7-inch screen with intuitive, user-friendly icons that make the new display quick to perform and easy to use. A new quick-release remote mount allows users to easily remove the unit for security and storage, while an ultra-strong magnetic base stays put in the toughest conditions. It has even been tested to withstand wind speeds of 100 mph.

“Commander 7 showcases a lot of state-of-the-art features,” reported Bieberdorf. “The thing we’re most proud of, though, is the different viewing options we offer our users. Commander 7 doesn’t box you into a single view.”

“Our Advanced Drill-To viewing mode featuring PerspectiveView is a game-changer,” Bieberdorf said. “Our engineers have developed an intuitive leap forward in data presentation that’s truly out of the box.”